Vancouver Island – Ucluelet on the Rocks

Ucluelet on the Rocks

Ucluelet – Vancouver Island has a wonderfully rugged coastline. Even on a calm day the rollers crash into the rocks putting on a show I never got tired of watching.

I found this Starfish in a tidal pool on Vancouver Island. It was about 8 inches across – very beautiful.

Sunset taken on the Wild Pacific Trail Vancouver Island British Columbia. As I walked this trail I could not stop saying WOW! as we rounded each bend and another beautiful vista opened up before us.

A lone paddler heads out sea. There is nothing like a little solitude to calm the soul.

Taken on my recent trip to Vancouver Island

Last night several of us went out to a farm in Baden Ontario to photograph horses on the run. We all had a great time. This type of photography is a great learning experience since you can experiment with all your settings to get the effect you are looking for. 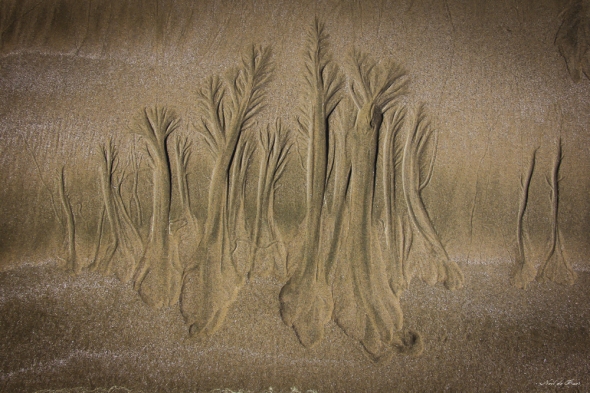 While walking along Florencia Bay on Vancouver Island, British Columbia these markings in the sand that looked like trees caught my eye. They were somehow produced by the receding tide. I am constantly amazed by the beauty to be found in the most unexpected places. It was almost as if God was drawing pictures in the sand!

I became aware of the crash site of the Canso 11007 bomber on Vancouver Island near Tofino while researching places to photograph on our trip to the Island. It has been sitting here since the day it crash on February 8, 1945. The trail entrance is not well marked and we would not have found it without the help of the locals. The trail is challenging and muddy! If you plan on doing this hike I suggest you wear rubber boots and pay attention to the markers or you could get lost. I knew very little about the history – I just knew I needed to see it. I have since done some research and have written this account of what happened based on that research.

Flying Officer Ronnie Scholes shoved the throttles forward on the Vickers Canso PBV-1A. RCAF serial number 11007. It was 11:00 pm February 8, 1945 as they lumbered down runway 28 of Tofino airport with 12 personnel, its normal emergency gear and a full load of fuel – about 750 Gal. (3,400 L). The aircraft also carried four 250-pound (112.5 kg) depth charges as they were on a routine night patrol, looking for Japanese submarines.

As Scholes watched the end of the runway disappear under them the unexpected happened. The port engine quit cold. Scholes quickly went through his options. Too low to turn and not enough power to gain altitude left him with only one option – land straight ahead. Fighting to maintain control Scholes kept his cool and came up with a plan to minimize the impending impact. As they broke through the trees he managed to slow the plane by pulling it into a full stall. Fearing the worst the crew braced themselves as they slammed into the ground.

Navigator  F/O Lace Knechtel was riding in the port blister, facing aft. When they hit the aircraft stood almost upright on its nose. He could see the tail go up and up until he was looking at the stars past the tail; then it crashed back down into the bottom of a heavily wooded hillside only a few miles from the airport. All the lights in the aircraft went out. There was no sound from anyone. He thought they were all dead, until he heard someone start swearing. Knechtel then heard a crackling noise. Looking out forward he saw, through a waterfall of gasoline from the ruptured left wing tank, that the port engine was on fire.

Knowing what had to be done he yelled for a fire extinguisher. One of the engineers handed one to him and he climbed up over the wing by kicking a foothold to get started. As he got over the top, the extent of the damage revealed itself. The nose was ripped completely away forward of the pilots’ seats. The seats were just sitting there in the open! The nose was lying off to the right and on its side. The fluorescent instruments were glowing in the dark and he could hear the gyros still humming. Having put out the fire it was time to assess the casualties.

Miraculously everyone had survived! Knechtel and 2 others were uninjured. Flying Officer Ronnie Scholes had a fractured forehead and a broken nose, WD Aircraftwoman 1st Class RJ Pike had a sprained ankle and the others had numerous cuts and bruises, all minor. 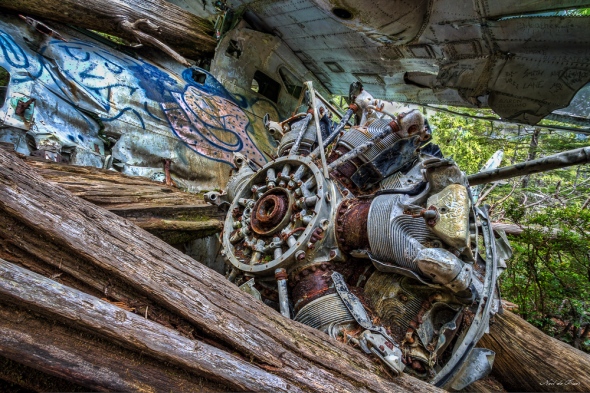 The three uninjured dragged out the parachutes and stumbled about 150 feet (45 m) away to the level ground behind the wreck and then made trips back to the aircraft for sleeping bags and emergency rations. Using one of the parachutes they set up a tent and remained there overnight. After bedding down the more seriously injured they established a watch. They tried the Gibson Girl (emergency radio) without an aerial, as Knechtel wouldn’t allow any of the fellows to climb a tree in the dark. At about 0300 hours they could hear shouting at the airport and then an aircraft cranked up. 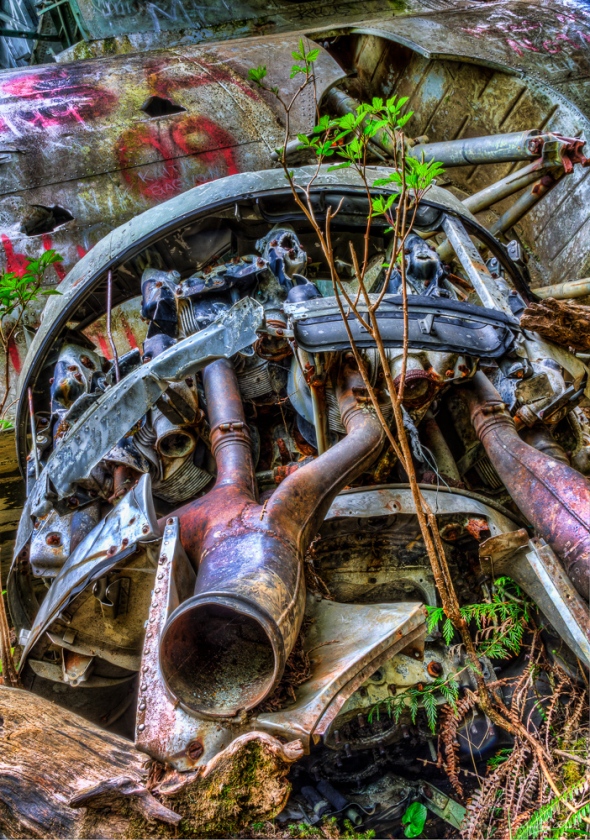 Back at the Tofino air field they had received word that Canso 11007 failed to arrive at Coal Harbour. Before first light at 0330 hours, Canso 9753 with F/O Weir at the controls took off into the dark night. A few minutes later, Weir spotted a red flare. Relieved to have found them he circled around the hill and F/O Edward “Ted” Darroch dropped a parachute flare to let the survivors know they had been spotted.

On the ground Knechtel had just stopped cussing the rescue pilot for his blindness, when he saw them come around the hill from the other side, circling left and dropping a parachute flare. Relief that they had been found quickly turned into horror, as they feared the flare would land on them or the aircraft covered with spilled gasoline and bombs on board. Fortunately the flare missed everything.

Later that morning another search aircraft took off flying in a straight line to the crash site. The Canso circled as a beacon homing a ground party to the downed aircraft. After reaching the wreckage, the injured were packed out while the others walked, all ending up base hospital for treatment or observation.

Research was drawn from the following sites: Some of these sites have pictures of the crash site taken by the rescuers.
http://web.archive.org/web/20090525020559/http://www.pinetreeline.org/other/other43/other43ad.html

Every year from May to October, communities across the province open the doors to hundreds of historical buildings, places of worship, museums, private homes, industrial areas, green buildings, heritage gardens and other interesting venues – some of which are rarely accessible to the public. Many of the participating sites offer special activities, such as tours, exhibitions and demonstrations – all free of charge!

In the past we have enjoyed Doors Open Waterloo Region so this year we plan on exploring what other communities have to offer.  Check out their web site for a list of participating communities. http://www.doorsopenontario.on.ca/

Last weekend we travelled up to Owen Sound Ontario to see what they had to offer for Doors Open – Owen Sound. Our first stop was the old Owen Sound Filtration Plant located in the Inglis Falls Conservation Area. Built between 1910 and 1912 this concrete structure is 160 feet by 160 feet (48 meters by 48 meters). Water from the Sydenham River was diverted into the plant and filtered by gravity through layers of sand and gravel. Click this link http://www.greysauble.on.ca/ca_lands/inglisfalls.html for a more indepth description. 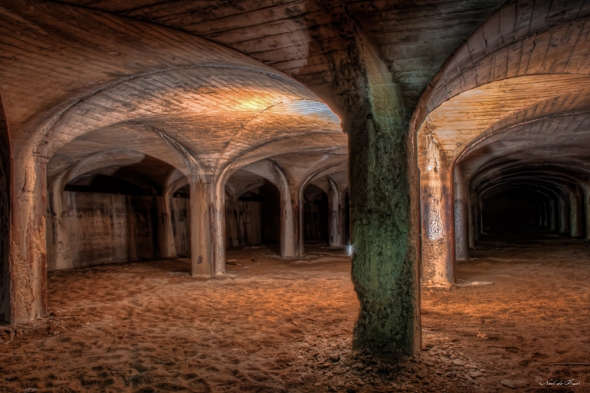 The process of cleaning the water filters was labour intensive, involving washing the top layer of sand. It took six men two days to clean one filter. Three men would skim the sand, two men would run wheelbarrows to the door where another man loaded the sand into a sand washer. The washer was filled with water and the sand was pumped under 110 pounds of pressure and sprayed out a fire hose which ended in a ¾” nozzle. The clean sand was deposited on a large cement pad outside the filters and then replaced by filling wheelbarrows and dumping the sand through the manholes in the roof of the filters. This process had to be done every two to three months, less frequently in the winter. Near the end of its use, the filters had to be cleaned very two to three weeks because of degrading water quality.

Water Filtration Plant Owen Sound – Showing the manholes where clean sand was dumped back into the plant.

This is the room with the valve controls and where they would add Chlorine as required. 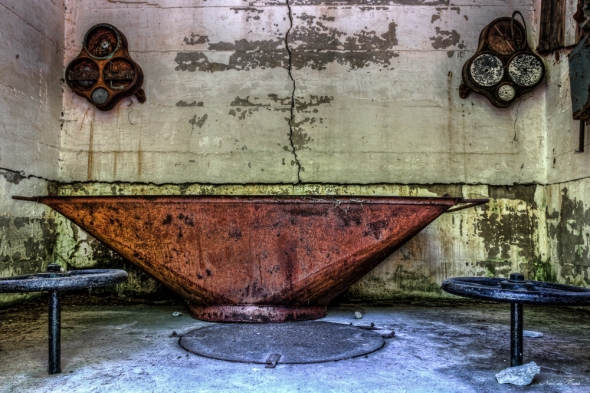 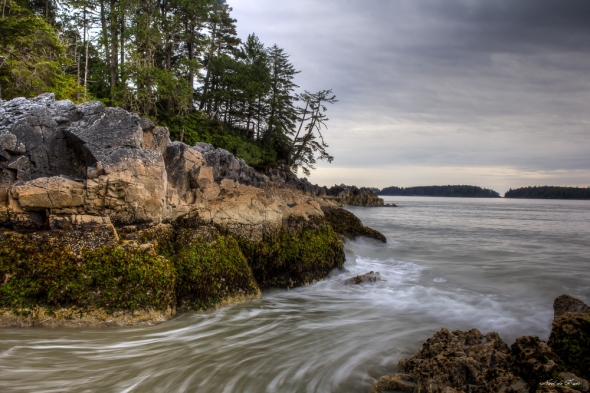 At the south end of Tonquin Beach on Vancouver Island you will find this beautiful tree lined out crop of rocks with the ocean swell rolling in and out.

On day 2 we also visited Tonquin Beach just south of Tofino, Vancouver Island. The tail to the beach was easy compared to what we did earlier in the day which I will share in another post!

This little bridge was at the end of the trail to the beach.