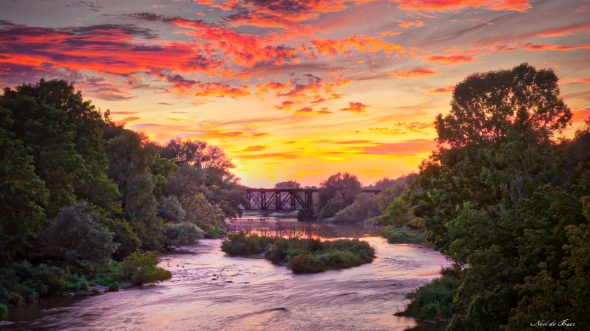 A shot take from the bridge over the Conestogo River in St. Jacobs.

As the sun dipped below the horizon the sky danced with colour!

We heard the fish were jumping at Denny’s Dam on the Saugeen River near Southampton Ontario so we stopped on the way home from the cottage to see if I could get any shots. I was lucky enough to get a few.

So what is the Fish Tale – well it goes like this.

There is a family of fish that live in the Saugeen River just upstream from the lighthouse under the bridge in Southampton. There was Papa fish, Mama fish, and Teen fish.

On an unusually warm Sunday in September they decided to look for cooler waters. In order to cover the most area they split up and began their search.

Papa fish headed out to Lake Huron. Mama fish explored the river for some deep spots and Teen fish headed further upstream to see what he could find.

After several hours they met back under the bridge.

Papa fish reported that he had quite a time dodging the boats coming up river and it took all his willpower not to try and eat all the tasty treats being offered at the end of many shiny lines along the pier. By the time he got out to the lake he barely had any energy left and said he was feeling Lake Sick.

Mama fish reported that she zigged and zagged up the river looking for whatever deep spots she could find. She too was tempted by treats offered at the end of a shiny line coming from what looked like two posts standing together upright in the water. After all this exploring and avoiding the posts in the warm river water she was thoroughly tuckered out and said she was feeling River Sick.

Teen fish reported he had quite the adventure. He swam upstream through the warm waters, past the posts with their treats on the shiny lines. He had a sense that for some reason this was what he was meant to do. Finally he reached Denny’s Dam. There the water was rushing over the dam with great speed and force.

He swam with all his might, jumping into the air to try and get closer to the dam. He felt compelled to to get over the dam by some force he could not describe.

After all the jumping and swimming against the rushing waters exhaustion overtook his drive to go further upstream and he headed back to his parents under the bridge. With the little energy he had left he said he was feeling Dam Sick!

We planned to spend the evening with the stars. Heavenly stars that is. I was all set up on the lighthouse pier in Southampton Ontario. I had the Lighthouse in the foreground and we were waiting for the sky to get dark.

Just as I started to shoot a group of people with flashlights come walking up the pier. Now they could not see us and we are wondering who they were and what they were up too.

My wife shouts out a hello and they say, sorry we did not see you there. At this point we see them putting down camera gear. OK we have company shooting the stars.

We were joined by a group of 4 young people and they came out to do some light painting with steel wool in a whisk. (for details on how to do this just google it and you will find lots in info)

This is something I have always wanted to try photographing and they were kind enough to let us join them in the fun. This was the first time for all of us and we had fun experimenting.

After a few tries we were joined by another photographer from Southampton.

We all had a blast and I think the results are pretty cool! 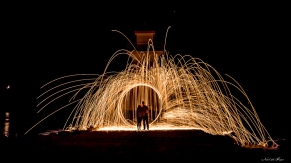 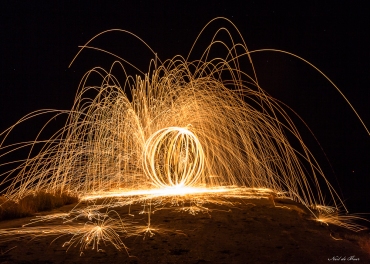 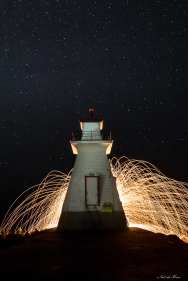 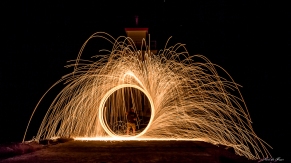 We were kayaking down the Conestogo River on Saturday afternoon. When we left the sun was shining and the weather forecast did not call for rain until evening. As the afternoon progressed these cotton candy clouds moved in. I have never seen anything quite like it before. After that the rain clouds moved in and we got soaked.

Despite the weather we had a good little trip and saw lots of different birds which I will post at a later date.