Sailing from Tobermory to Wiarton this summer – we knew we were almost home as we rounded Cape Croker and spotted the lighthouse. 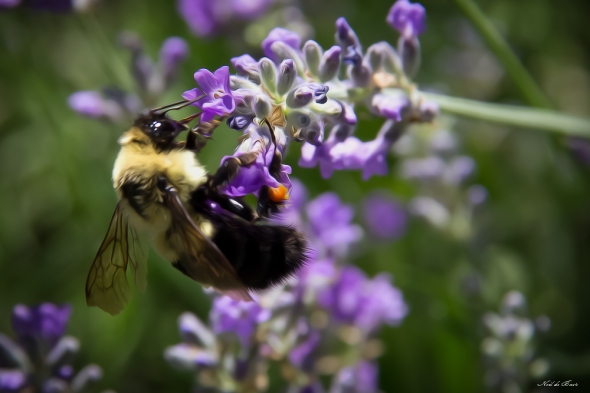 The bees dance from flower to flower. They never seem to get tired and I seem to never get tired of watching them.

I took this picture while sailing up the St. Clair River this summer. Trees standing alone in a field have always caught my attention. I always wonder why.

So this is another sunflower shot I took in Owen Sound when we were there to see the tall ships. I love the fall colours of this variety. It almost looks like it got sunburnt! 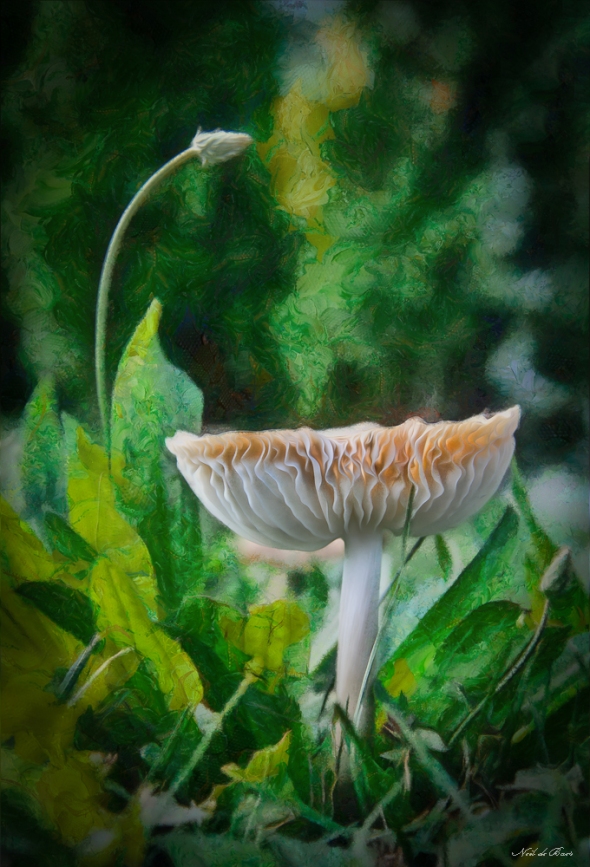 As I was walking home after meeting with fellow blogger Allan of Modes of Flight this mushroom with a little plant arched over it caught my eye. After shooting from a few different angles I chose this one and blended it with a painted look.

An Outing & a Meeting

I had a chance to meet up with a fellow blogger this weekend. We had a wonderful chat and his post say’s it all. Thanks Allan. If you are not following his blog please check it out!

The sunset lined up nicely with this farm tonight. Glad I had the camera with me. Don’t leave home without it!

This is a 3 exposure HDR. Processed with Lightroom, Photomatix, Photoshop, Topaz adjust etc. 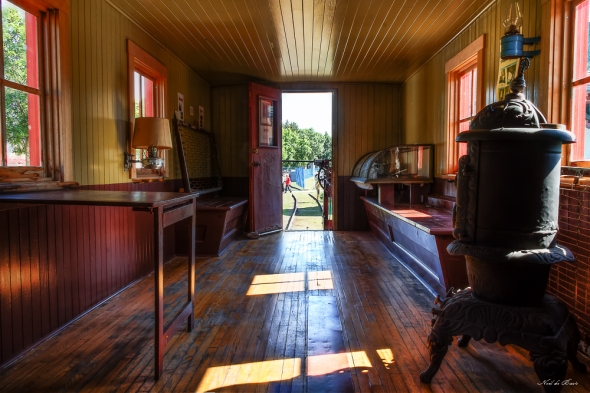 This is the interior of a Caboose on display at the Owen Sound Marine & Rail Museum.  Here is a little history from their website. http://www.marinerail.com/caboose

In 1947 the boxcar was converted into a caboose at CN’s Leaside shops in Toronto. This caboose was ready for use on December 13th, 1947 and was used by CN for many years until it was eventually retired. The Caboose was left sitting on a siding for a few years. A siding is a single piece of track attached to a mainline at one end for train cars to sit on. It is like a driveway for train cars.

The caboose went to the McDonalds Restaurant in Owen Sound and was used for parties and other events. A lot of changes were made to the caboose at that time.

In 2002 the caboose was brought to the museum and the restoration project began.

I’m not a sportsman but a photographer so I “snagged” this shot the other day.

It is a 3 exposure HDR processed with Photomatix, Lightroom, Photoshop and Topaz adjust.

The Sunflower and the Bee

The Sunflower and the Bee

It seems to me the Sunflower and the Bee are made for each other. The yellow and black let the bee blend in so that they almost become one. Of course the one needs the other to survive.

The Lynx at Collingwood

This is the bowsprit of the Lynx docked at Collingwood for the Tall Ships 1812 Tour. She is a 122 foot Square Topsail Schooner from Newport Beach, California.

We went up to Owen Sound and Collingwood this weekend to check out the Tall Ships 1812 Tour. This turned out to be a very popular event.  Owen Sound was sold out with 6000 tickets sold to see the ships and the wait in Collingwood after purchasing tickets was at least an hour. With that number of people we chose to veiw from afar. This is the Pride of Baltimore II is a reproduction of an 1812-era topsail schooner privateer docked in Owen Sound. I will post more shots later this week. 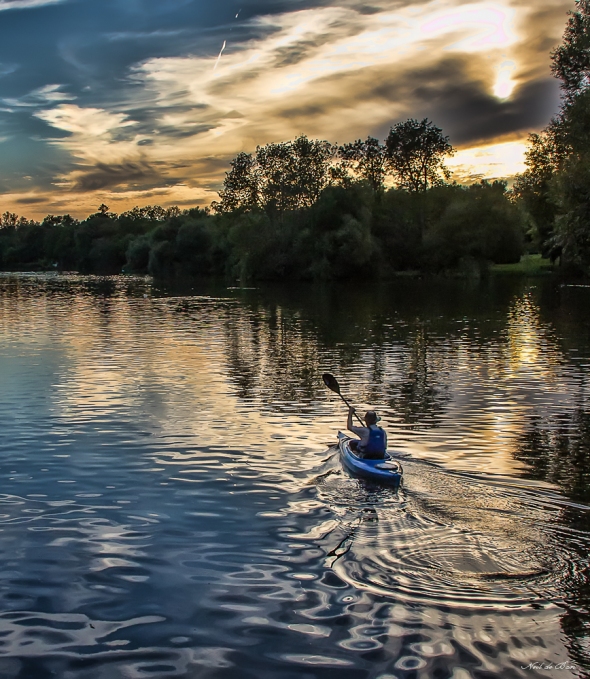 A lone kayaker paddling into the sunset. What a wonderful way to shake off the tension and worries of the day. You can almost feel your blood pressure go down just watching the rhythmic motion of the paddle.

Sailing out in the middle of Lake Huron gave a unique perspective of the storms that were passing to the south of us. These huge storm clouds would surge high into the sky quite rapidly. It makes one marvel at the amount of energy it must contain. 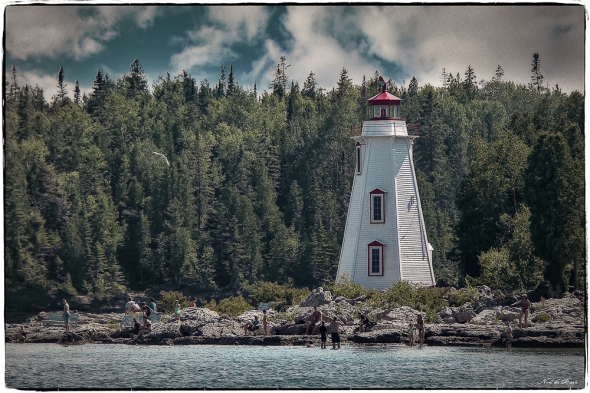 Sailing to Little Tub Harbour Tobermory, we passed by the lighthouse at the entrance of Big Tub. It was a warm day the the swimmers were testing out the cool water. 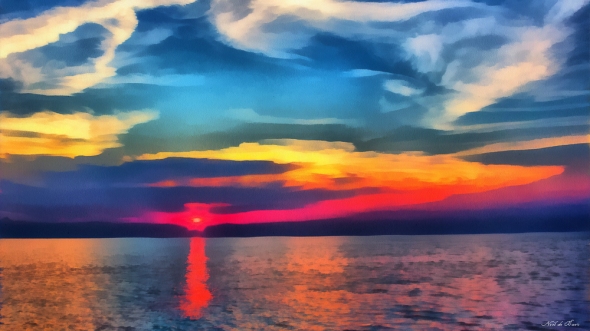 Sailing on up lake Huron this summer I took this sunset shot. The colours blend together nicely with this paint filter. Dynamic auto painter creates some beautiful effects with lots of control.

I came across this tomb stone in a cemetery in Toronto. The inscription struck a chord with me. I think it reflects what a lot of us may be thinking about our life and faith.

The St. Jacobs area is well known as a Mennonite community. As I was driving out of town the other day I saw this young lad raking the hay so I had to grab a shot.

The Royal York Road United Church in Toronto has a beautiful Sanctuary with blend of wood, brick and stone. We attended a memorial service here for my wife’s Aunt. It was a beautiful service in a beautiful church.

This shot is a vertical pano made up of three, three exposure HDR shots processed in Photomatix and the panorama merged together in Photoshop 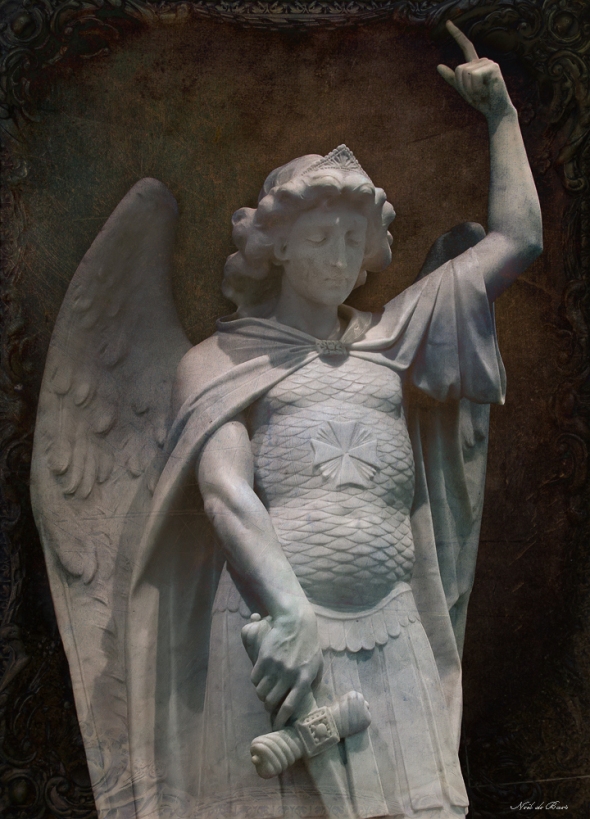 Standing in the lobby of St. Michael’s Hospital in Toronto is this statue of St. Michael as a symbol of hope and healing to all that visit. Several weeks ago my Sister and her husband were in a motorcycle accident and ended up in the trauma at St. Michael’s. This unit is one of the best in the country and we are fortunate that they got and continue to get excellent care. My Sister is still in ICU due to some lung issues but is progressing. Her husband is doing well and has been transferred to Bridgepoint for rehab.

Here is some interesting history related to the statue from the Hospital web site.

For almost a century the statue of Saint Michael the Archangel has graced St. Michael’s as a symbol of hope for employees, patients and their families. The artist and date of creation of the statue are unknown, but the name of ‘Pietrasanta’ chiselled on the back of the statue indicates the stone is from the same quarry in Italy where Michelangelo procured the marble for his famous ‘Pieta’.

How the statue made its way to Canada is unclear, but what we do know is that during the latter part of the 19th century the Sisters of St. Joseph found this statue, dirty and blackened, in a second-hand store on Queen Street. Recognizing its value, they wisely bought it for the sum of $49 – money they had accumulated from the sale of old newspapers.

The statue now stands in our Cardinal Carter lobby, meticulously restored, a symbol of hope and healing for all who visit. It is why St. Michael’s is affectionately known as Toronto’s Urban Angel.

This light marks the turn for upbound vessels into the entrance of the Detroit river from Lake Erie. Here is a little history from the Lighthouses of the Great Lakes web site.

“Completed in 1885 by the U.S. Army Corps of Engineers at a cost of $78,000, the Detroit River Light replaced a Canadian lightship that had served since 1875. The light was first exhibited August 20, 1885. Located near the end Bar Shoal which projects from the Canadian shore, in Lake Erie just south of the entrance into the Detroit River. This is the point where up bound vessels make the turn into the Detroit River.

The 49-feet high cast iron plate tower is 22-feet in diameter at the base and 18-feet at the top. It was built on a pre-fabricated 45′ x 18′, crib that was transported to the site from Amherstburg, Ontario, sunk in 22-feet of water, filled with concrete and surrounded by a granite pier.

The light station pier has the appearance of a vessel, with the pointed end directed toward the mouth of the river to break ice flows coming down river.

The construction of the station was tested in December 1997 when the 635-foot freighter Buffalo struck the station dead on while sailing downbound for Lake Eire. Damage to the station was minimal involving only the structure’s rock and stone foundation.

The freighter faired much worse with its steel bow push in like a tin can. The station’s stone pier torn a 25-foot gash across the bow of the freighter which then took on water. The vessel was able to control the flooding and continued on for repairs.

The lens has been changed several times to change the characteristics. The present lens has six panels of 60 degrees, with three bull’s-eye panels each separated from the other by a 60 degree blind panel.

The station contains a fog signal, and is similar to Harbor Beach Lighthouse which also was built in 1885. The station is an active aid to navigation and is only visible from a boat.” 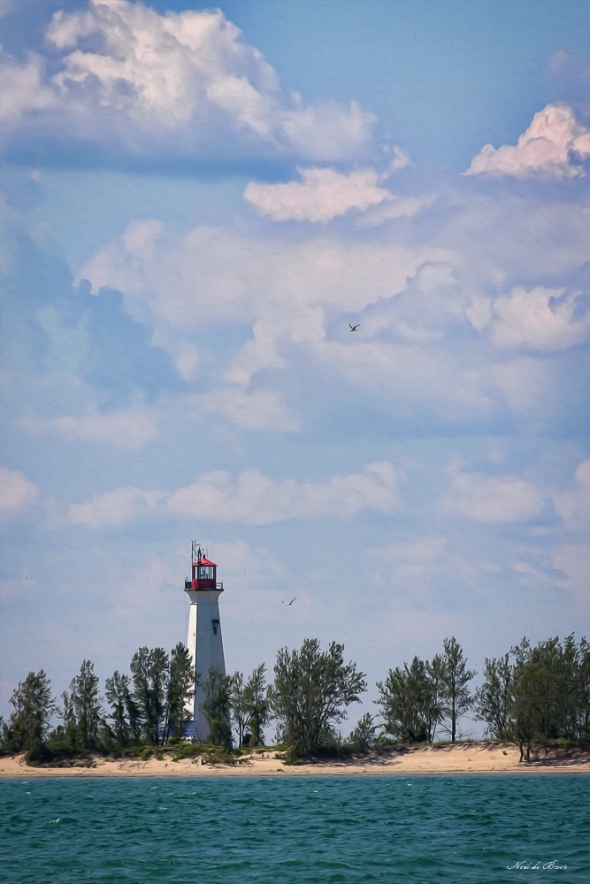 On the end of Long Point on Lake Erie stand this Lighthouse to warn boaters of the shallow waters. Here is a little history from the site Lighthouses of the Great Lakes.

“This tall white concrete tower stand near the end of Long Point in Lake Erie. It is the third light to be located here to mark this dangerous sand bar peninsula that extends well out into the lake. Previous lights were built in 1830 and 1843.

A keeper’s dwelling was located near the tower, but was allowed to fall into ruin after automation of the light.Viewing the light is best done by boat. A large part of the end of Long Point is a Canadian National Wildlife Area.”